1. Nature Is Daunting For the Urban

There are many ways to get to Camp Cosmic and each is a journey in its own right. Either it involves switching trains and two different buses, rushing 160 km/ h on the Autobahn, reading esoteric books by yourself or tagging along a spontaneously joined group of festival goers, the common ground is a mystery that unites all threads. Knowing the exact itinerary and sticking to it is quite a puzzle, so it comes to no surprise if you mix up bus stops and find yourself in the middle of nowhere looking for a lift.

If you’re a music digger who spends most times indoors with headphones on, nature can be quite a daunting thing. Nevertheless, trading the comfort of the occasional club environment with the uncertain geography of a natural habitat spiked with ticks and nettles may pay off eventually, once the free glitter starts to mix into the raising dance floor dust under a hi fi night sky.

One might miss a set or two due to practical camping challenges but everything is with a purpose and that might be admitting that survival in the wilderness might just not be your thing. No matter how impossible the circumstances seem, the good side is some humans might agree to help you out, which gives a cue about the caring vibe connecting everyone involved. When all else fails, make sure your friends can pack and camp to save their lives and yours. The first thing that made an impression before getting to the stages was that this was a camp site with rare house classics blasting from car speakers. Other people’s music can make one hate picnics so badly and luckily here, this was not the case. 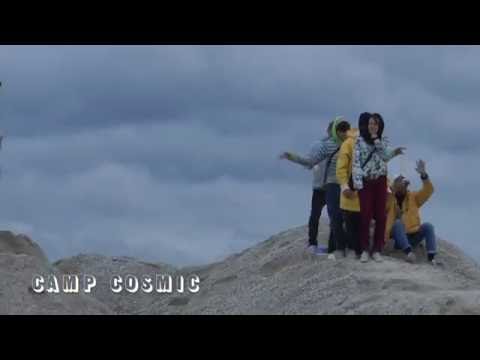 There is an open door to the main stage and it’s placed in the open space–which is a non sequitur–but since it’s a magic portal you have to take it as such. Before the door to the main floor there is another door and this is the main entrance. This is also a portal, if you wanna see it so. When we arrived, a guy wearing a Positive Education t-shirt welcomed us. We spoke about the event series and about a tape label he is preparing and will debut with the forthcoming GAM release. Enough references to feel at the right place and the right time.

The first set to hear upon the arrival was an arthouse cinematic journey curated by Guillaume de Bois, also known to digging youtubers as user Knacky Dancing. First sample weaved into the space dance layers was probably a nod to Ghost Dance, experimental film from 1983 directed by Ken McMullen better known for featuring Jacques Derrida talking about ghosts. The quote of choice features ethereal female spoken words about a sky radiating with electric lights. Set starting off in sync with dawning sunlight and you know this isn’t a coincidence. The selection moved kept a filmic constancy featuring a theme from 1977 movie Die Kette, arranged by Dieter Reith and a track by Italian retro diva Mina. It may have been a soft set, but one that showed significant, well documented subtext.

On the more lunar side, the remote little stage properly called Mondstage was blasting tactical slow beats of industrial flavor via Heap. The record mage and producer may be familiar as the founder of Vienna based record store Discus Throwers. The imprint is known to host a variety of gems and instant classics – a direction backed by Heap’s work as a producer, previously released on ESP Institute.

Right after, the live performance by Geier aus Stahl extended the introspective wit to time travel dimensions, unleashing old school sounding minimalistic sequences marked by crunchy vocals of SPK heritage. This thing could trigger a flood of memories for whomever spent their youth as a tape noise haze of 90s nostalgia.

On the Main stage the intensity increased, two sets later a cloud of holographic sparkles was hovering over the dancefloor thanks to these two guys who were giving away glitter and silver and golden gloves to complete the Sailor Moon transformation. There’s that point at a disco party when you arrive too late and you’re too dark so you can either choose to sit on the side or just go for it without overthinking it that much. Joining this senseless madness is a bit like falling in love – once you step in you can’t be judged by sober law, and the party is a whole lot different from within. Reminded me of what game studies likes to label as the ilinx state of space and time disruption. One couldn’t nerd around too much into the vortex about the DJ casting rare disco anthems, and whom the timetable described as Afrika Bambaader. So he remained a mystery, especially that there’s almost no information anywhere online related to the name. Almost, since breaking down the alias takes us to Bad Boy Baader, a mysterious figure who once reblogged a Disco Sigaretta track on a stellar disco Soundcloud profile.

Meanwhile, at the Mond satellite, we found As Longitude setting up intricate gear and preparing for a very alert live set which showed how communication works ideally within a duo sonic team. The very much expected performance of Eva Geist and Laura Odl rolled into punk and spacey electronic rhythms and layered textures. Melodic lines morphed at organic pace feeling overwhelming and spontaneous.

Right after, a selector sporting a Coil t-shirt – who goes by the name El Tigre Sound – delivered probably the ultimate true and cult industrial old school in-depth mix of the festival. The vinyl selection showed striking coherence weaving experimental sounds into post punk gems such as The Sisterhood – “Rain from Heaven” or The Sound – “New Dark Age”. “The Heat”, Italian new wave obscurity from Faust’o sounded magnificent, as the whole mix kept a deep and mysterious vocal register. The set channeled the right amount of edge and nostalgia, and it was unexpected how an introspective utterance as such could create an overall unifying dancefloor experience. It’s the kind of mix to send to your post punk friends from the late nineties, who tried to laugh at your initiative of attending a forest disco festival. It’s also the kind of fluid audio story that can be heard over and over and kept somewhere on a mixtape with renaissance tarot artwork.

Sunday came with a glowing sunrise and highlights that made it unforgettable. Magic happened in the packed and minuscule tent where Albion, Sacha Mambo and your usual Macadam Mambo allstars played possessed funk rhythms keeping the chord progression even and the dance pumping while shifting through zillions of brazen tracks. The tent was tiny and filled with dancers, people climbing on things and building a dynamic in such way that no one could sit down for a second, despite the minute space and the demanding all nigher. Exploring the dancier side of industrial and new wave, Sign Bit Zero label head Killian Krings, hailing from Leipzig, kept the Mond stage on the reflective side.

By that time, the main dancefloor was lazy and bathed in sunrise warmth and spAceLex had a witty and fun approach to it. This is usually the perfect moment of the day for spAceLex to drop uplifting enchanted tunes and tracks with lyrics so good you’ll google later. Like the 1982 track from 4D called “Sex Appeal”. The ecstatic bomb of the morning was hearing Mariah – Shinzo no Tobira in that environment and thinking of Miyazaki’s friendly forest spirits by free association.

The above mentioned less spacey tent floor became a balearic oasis later with a set by Mr Monday emulating the feeling of not having any single worry in the world, as the much awaited coffee started to brew evocating hashtags of deep meaning like #fresh and #luring, #finallyawake and #blessed.

Sunday afternoon continued as a laid back trip down the memory lane, going through fascinating records from all over the world, whose obscurity could easily make up for more than an average lifetime of manic digging. It was really rewarding recognizing something from the Music from Memory back catalog every once in a while, which got to tie the afternoon together.

Some key moments that you’d want to pack up and take home punctuated Sunday night, like Daniele Cosmo playing a Borusiade track, and an unidentified tune that sounded like early Haus Arafna – just to get some coordinates straight. The most exalted point to see that dancefloor was, however, the point when DJ Wahid Paradis of oddball disco crew 'wet delights' played the track “Paradiso” by Ivan Smagghe and Corss of The Junto Club affiliation. Not only that track sounds like a direct Alan Vega reference, sending low pitched deep chills across the audience, but also the lyrics capture so well the philosophy of where Camp Cosmic stands – just give it a spin to catch the drift.

The repetitive chorus chanting the word “paradiso” in different hypnotic modes worked like a charm and by the time the track stopped all the humans present started chanting with their voices and clapping rhythm with their hands while shouting joyfully for over five minutes, claiming the encore. It was an ingenuous moment and if you add the night sky filled with stars to it you get the maddest snow globe to make up for a mid-summer early Christmas present.

Checking out the cover of said record, out on Ransom Note, and the fairy tale chemistry of the closing night it was clear that, even if anyone can be a DJ in this day and age, not anyone can open their Third Eye, ad it is somehow at the intersection of these two abilities that something magic happens between sound and matter – and maybe it’s the fact the line up fits the bill so well what makes Camp Cosmic such a true experience.

This is not a review. Philipp Schmickl of The Oral magazine writes about Hagenfesten in Dala-Floda.

This is not a review. Philipp Schmickl of The Oral magazine writes about Hagenfesten in Dala-Floda.