Join us on Friday, July 7, at Uranus garden for an workshop of didgeridoo and percussion, starting 17.00.

The didgeridoo is a wind instrument developed by Indigenous Australians of northern Australia potentially within the last 1,500 years and still in widespread use today both in Australia and around the world. It is sometimes described as a natural wooden trumpet or "drone pipe". Musicologists classify it as a brass aerophone.

There are no reliable sources stating the didgeridoo's exact age. Archaeological studies of rock art in Northern Australia suggest that the people of the Kakadu region of the Northern Territory have been using the didgeridoo for less than 1,000 years, based on the dating of paintings on cave walls and shelters from this period.[2] A clear rock painting in Ginga Wardelirrhmeng, on the northern edge of the Arnhem Land plateau, from the freshwater period (that had begun 1500 years ago)[4] shows a didgeridoo player and two songmen participating in an Ubarr Ceremony.

Join us on Friday, July 7, at Uranus garden for an workshop of didgeridoo and percussion, starting 17.00. 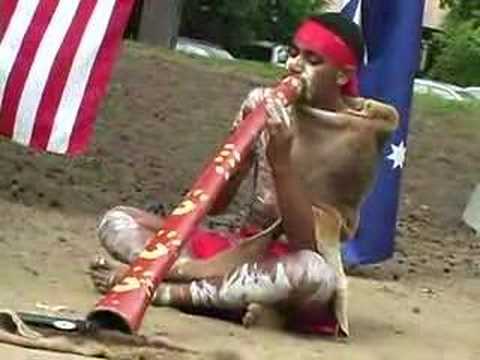